Data Obtained By Sounding -Softcover- ISBN 9781714456338
​Initial sketchbook produced at Eyemouth in 2019
‘Data obtained sounding’ refers to a hydrographic chart annotation. Historically depth measurements were made by dropping a lead line, information about the nature of the sea bed was also collected by a layer of grease on the bottom of the lead. Repeated readings were taken to form a set of contours of the sea bed.
Sonar operates in much the same way, (echo sounders) measure the time it takes for the echo of a ping to return to the surface.

These pings can be combined and expressed visually to form an image of the seabed. They remain a data set; measurements of a series of distances from the surface to the seabed.

Altering the position of the horizon to an imperceivable point and proposing an impossible viewpoint.

Our perception is further altered by processing the data as a two dimensional photograph, viewed head on so we perceive it as a landscape view, while the image actually relates to data obtained over a straight course. 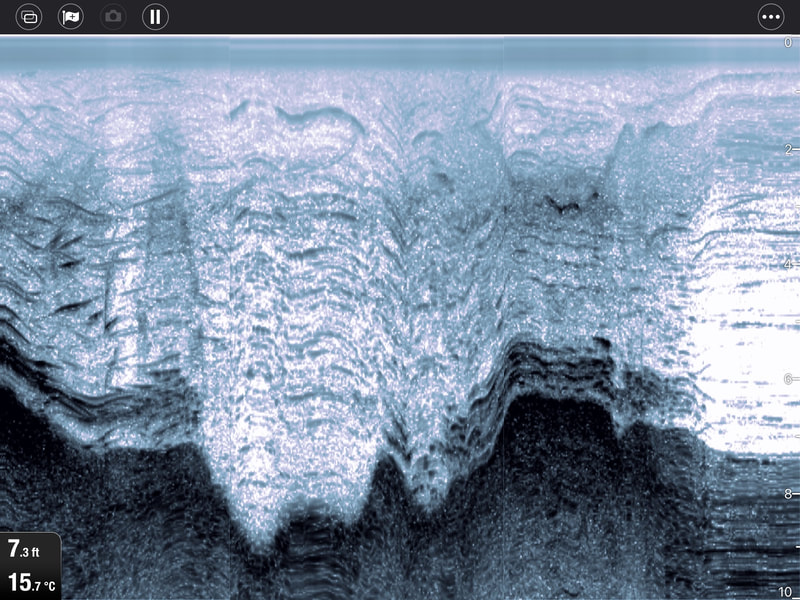 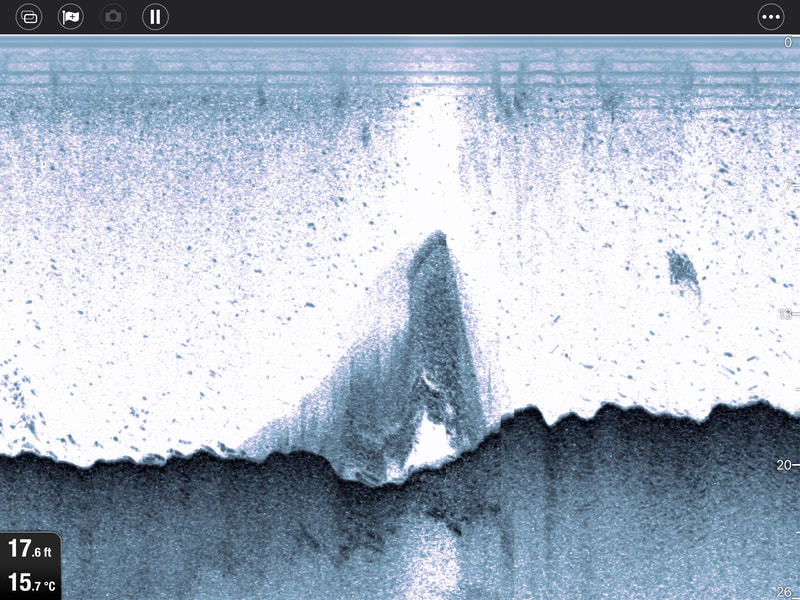 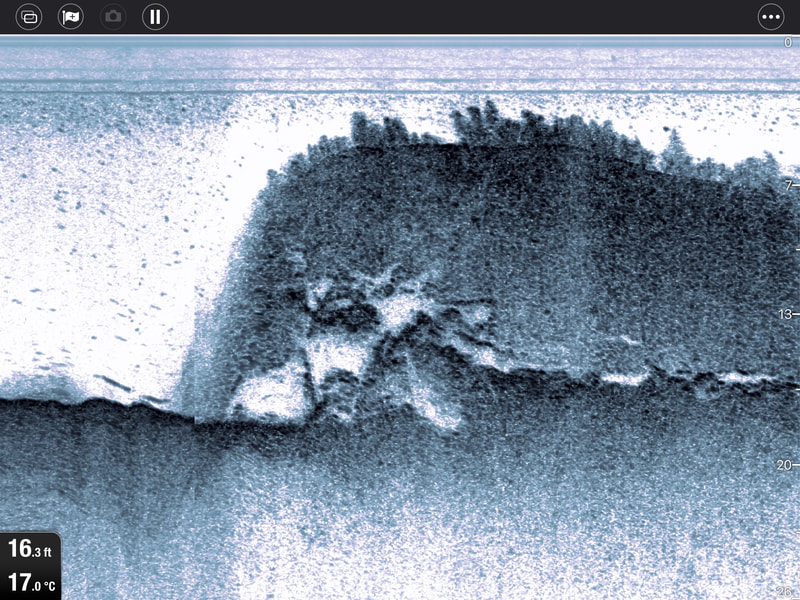 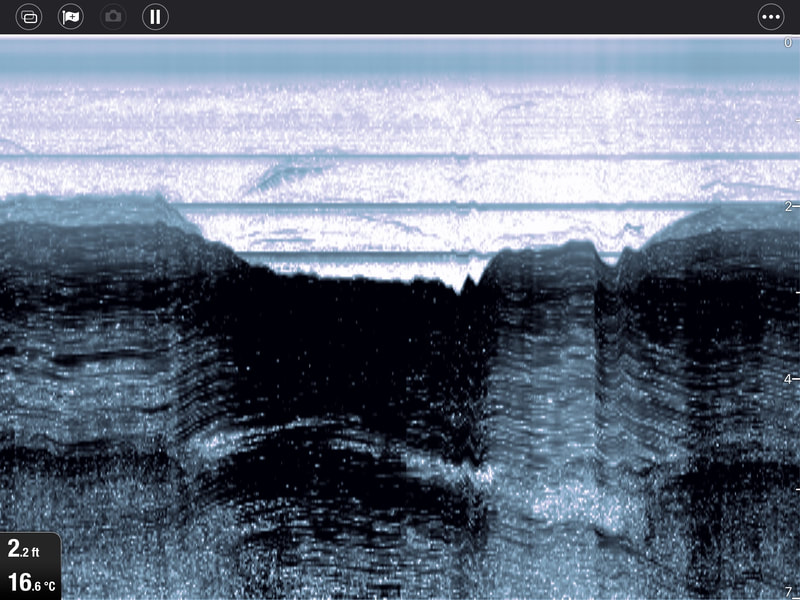 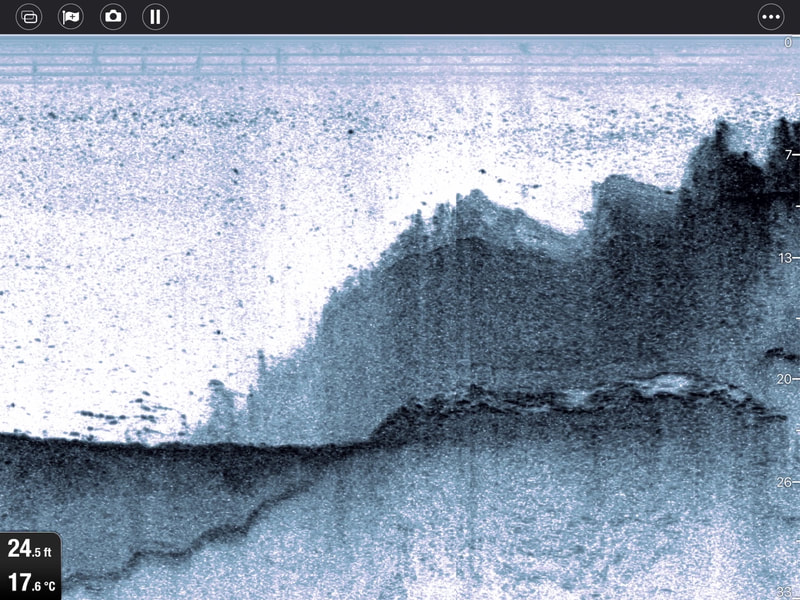 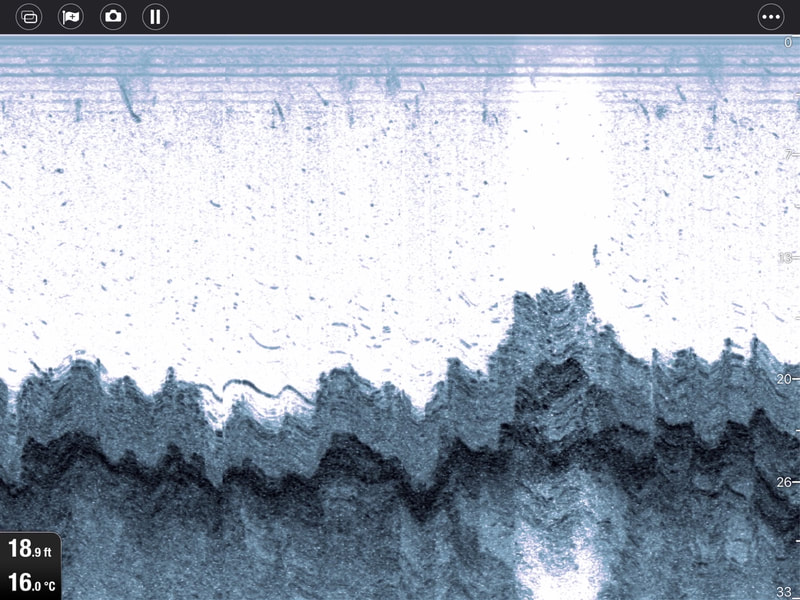 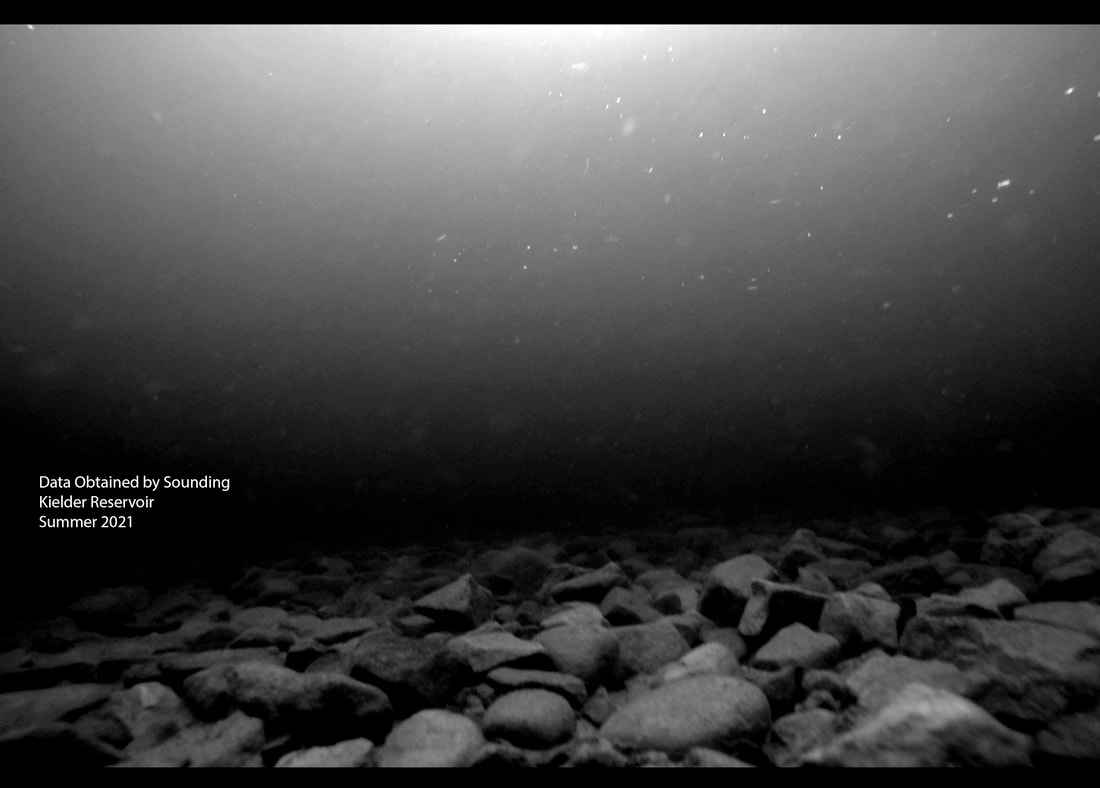 New Topographies
In 1975 a dam was constructed above Falstone in Northumberland, causing the valley to flood and creating a man made reservoir. The area was comprised of a number of paths, roads, routes, railways, farms hamlets and small villages. The project completely redefined the landscape of the area now known as Kielder Reservoir, creating a new topography. Most of the manmade structure in the area was demolished and anything that might contaminate the water as a freshwater supply was removed. My Dad used to tell me about the area in the 1960s when he went camping there. The names of the villages beneath are still used as locations on the lake.
Road to Wellhaugh and Plashetts 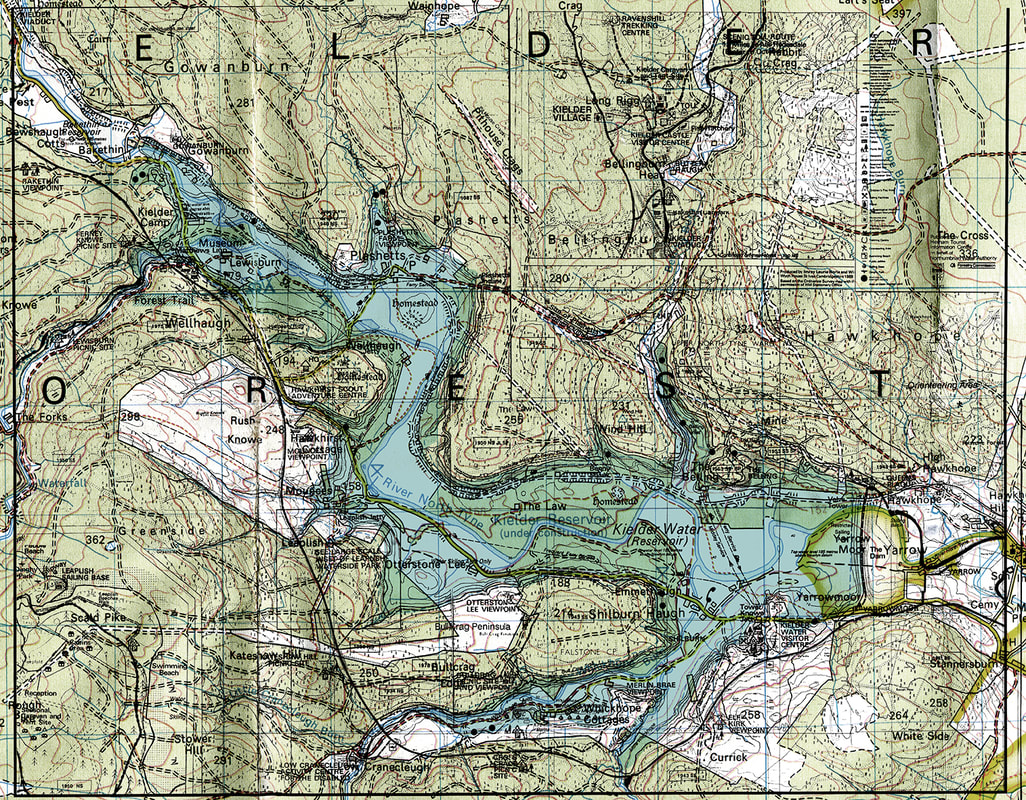 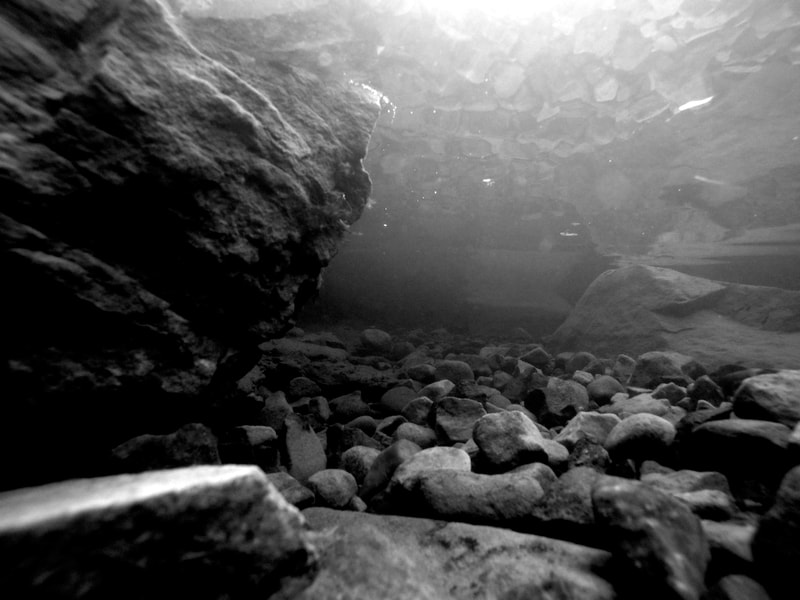 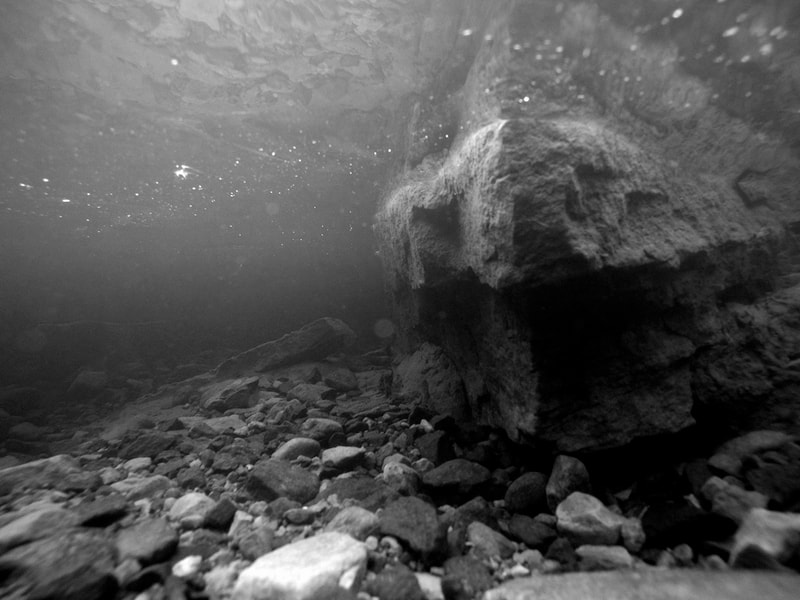 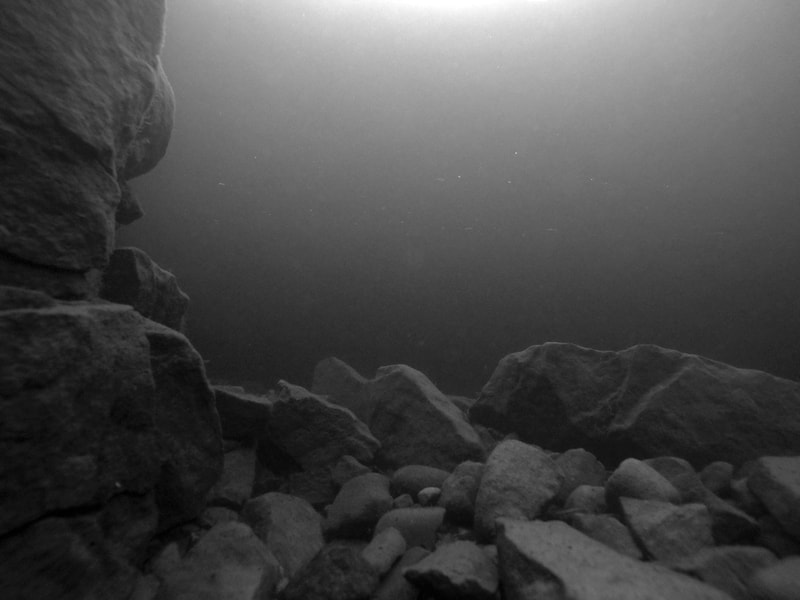 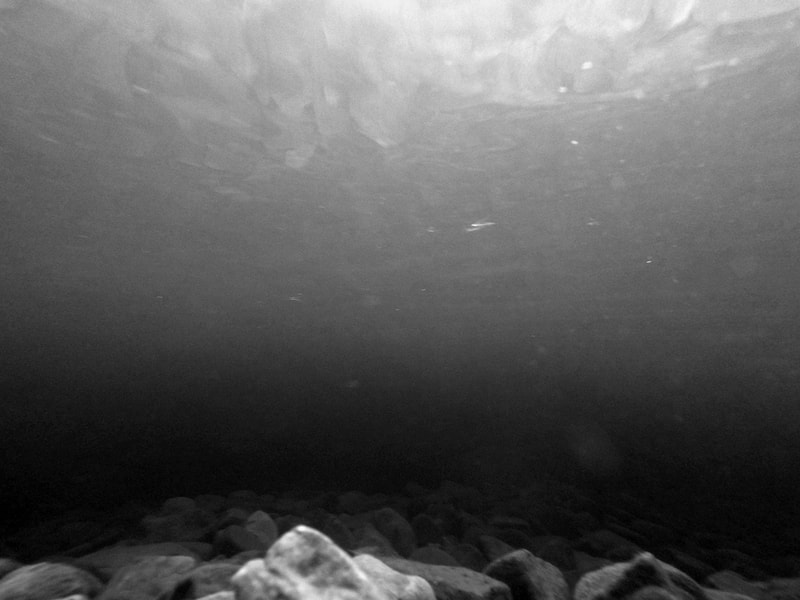 Sunday 16th May - It had been my intention to hire a fishing boat on Kielder and go out to make some initial soundings on Saturday 15th May, however due to fairly rigid regulations on accessing the lake and the number of adults required in the boat I was unable to carry this out. At short notice I decided to construct a small raft to mount the sounding equipment on and float this out onto the lake to obtain some soundings. This was fairly successful and I was able to record around 40 minutes of sounding data on the Sunday.

It is my intention to trace some of the historic routes that are below the surface of Kielder by tracking waypoints from old maps. These could potentially result in some fairly long composites; the top image was made over a distance of around 50 metres and taken over a period of around 10 minutes. The image is derived of a number of captures from a continually rolling image and then composited together.
The Wreck of Scintilla
In 2003 I obtained a dilapidated 1960s Stella class sailing yacht at Kielder and spent several years restoring her. Scintilla was clinker built mahogany on steamed rock elm frames, designed by Kim Holman. Having restored her I sailed her for a few years, spending each winter repainting and generally maintaining her. In 2007 she disappeared having sank on her mooring. My immediate response was that she could probably be recovered if I acted quickly. As a result I intensively learned to dive and obtained advanced diving qualifications over the next month, only to be told that I would not be permitted to dive on Kielder and that a commercial dive team would need to be engaged to complete the recovery. The estimated cost being in the region of £10,000. The recovery team actually spent in the region of £45,000 attempting to recover her and I still do not know if they ever successfully completed the salvage operation. ​
Data Obtained by sounding - Eyemouth
In 2017 I acquired a 1980s Sailing yacht based in Eyemouth on the East coast of the Scottish Borders and have been using it as a studio base for my creative practice. Coincidently Mercurian; a Colvic UFO was also designed by Kim Holman. Data obtained by sounding was one of the many projects that were initiated on board Mercurian over the last few years. Considering the nature of horizons, sublime data and how we interpret information to understand our environments. ​
Digital Ephemera
Searching through my digital archives I stumbled across the wreck recovery manifest for Scintilla along with some historic cartography that I had prepared to assist in the wreck recovery at Kielder. This consisted of a chart that had been overlaid showing some of the depths at various locations and scans of historic maps of Kielder prior to its flooding in 1975. I had layered these digitally to create a representation of what lay beneath the lake and in particular to define the depth and altitudes at the wreck site.
Loose Connections
​This series of loose connections has led me to consider exploring the topography of the lake bed at Kielder. The idea that these places are inaccessible holds a sense of intrigue and whilst the data obtained will be vague and not representative of the place as it existed, I find the past histories of the space fascinating. This links to the ideas of raw data and the sublime explored in previous projects along with ideas around horizons, viewpoints and how we interpret information to build an understanding of our position in the world. The idea is to collect and collate data using a combination of sounding, underwater photography and audio recording then allow this information to build its own narrative. Allowing others access to the data collected, enabling them to construct their own narrative interpretation of the historic and existing topographies of Kielder.
google-site-verification: google3d5541efc79cc1f5.html